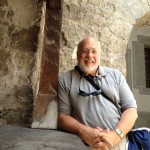 Dr. James Shrader retired on July 1, 2016 as a tenured Professor of Music and former Department Head at Valdosta State University in Southern Georgia. He was also a Faculty Associate in the VSU Honors College where he served as a Program Coordinator.  He has combined careers as an opera singer, conductor and stage director; a church musician; an international choral conductor; a published composer; an author of fiction and non-fiction books; and a university administrator.

His career encompasses 17 years as a full-time church musician and 26 years as a university professor/administrator.

He is a published author with his book, The Choruses in Mozart’s Opere Serie (Edwin Mellon Press).  His choral compositions are published by Colla Voce, Inc. and SMP Press. His music may be heard on the CD Dashing the CD Evolutionary Spirits (Donald Nally and The Crossing), and the CD Fleeting Realms, all released on the Navona label (PARMA Recordings). He conducted and recorded his chamber opera, Frogs Always Get You in the End in 2017. His latest work, Angels Sang With Mirth and Glee is published by Colla Voce and has been recorded by The Crossing Choir conducted by Donald Nally. He also publishes with SMP Press (Sheet Music Plus).

In retirement, Shrader continues to compose and write while beginning a new career as a licensed realtor.

“There is no justification for mediocrity!”  – James Shrader

“Time is the currency of the new millennium.”  – James Shrader