By  now we can barely see Hermine’s derriere as she dissipates into the North Atlantic and beyond, but for about 24 hours a few days ago, South Georgia felt the brunt of her fury.

Having lived here since 2006, we’ve been spared the hurricane drama that occasionally plagues both the Gulf and Atlantic coasts. When we moved here, we rejoiced in the fact that we could get to either Gulf or Atlantic beaches in about two hours – and we have! Also, the weather threats seemed to calm down and even vanish by the time they made landfall and traveled inland to us. We certainly didn’t miss the regular tornado threats and debilitating ice storms that we encountered during eleven years in northwest Oklahoma. Then along came Hermine!

We watched in escalating trepidation as the weather models seemed to draw a path directly through our location. Sure enough, when she finally arrived, she seemed to be looking down right over our house!

The power went out just after we bedded down for the night. It would be out for just a little over twelve hours. For two prior days, the winds had escalated and the rains poured down, but the rear garden gazebo survived and I only siphoned off the pool level once. Still, the weather reports and the radar models had looked dire.

When the power did finally go off, I awoke to Moxie joining us in the bed (she doesn’t do well in storms). After realizing that the power was off, I focused on the sound of the storm – lots of thunder, lightning, and heavy rain rattling the windows and creating a sizable din. I grabbed my preset nightstand flashlight and the trusty iPhone and headed downstairs to investigate. I confirmed that the power was off, I tried to peer out the windows, but the horizontal rain path prevented me from seeing much. In order to check the gazebo and pool levels, I braved opening the back door. Sure enough, it was a powerful storm. The gazebo seemed to be allowing the wind to pass through without danger. The pool was quite high, but I made the decision to not brave the onslaught in order to drain it a bit – but wait – there was no power for the pump! Duh!

So, it was back to bed – no AC, no ceiling fans, no nothing. While trying to sleep, I thought of what the next day would bring. The water was still on and we had converted to a gas cook top when we did our kitchen renovation. That meant the morning coffee service was safe! Whew!

In the final analysis, we fared pretty well. We closed the blinds and the house stayed relatively cool. We did not close the refrigerator doors and, subsequently, lost no food. The power did come back on thanks to an army of power trucks from Georgia and several surrounding states. The gazebo came through unscathed and I leveled the pool depth with no problem. The power had messed with the computer settings for the irrigation system, but that was eventually resolved. 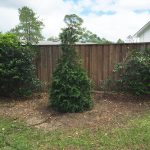 The only real casualty was a beautiful, full, evergreen tree at the wall in the back of the property. The gale force had pushed it over and wrenched the roots right from the ground. After considering several plans to replant it, we opted for removal/replacement. We now have a lovely little evergreen ready to beautify the garden through the coming years – I think I’ll name it “Hermine!”

As you can see, Eva’s swing set, the gazebo, pool, and house, all survived as well! AND Moxie too! Cheers!  -Jim 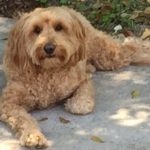 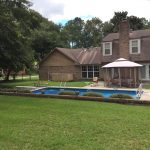 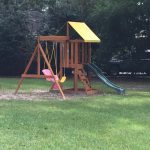